On October 15th, a team of four representing NIC Partners competed in the Orangewood Adventure Challenge, an event created by Orangewood Foundation board member Paul Tobin to raise scholarship funds for former foster youth. The Orangewood Foundation, based in Santa Ana, California, provides assistance and services to youth who are currently in or coming out of the foster care system. The Foundation’s stated mission is “to prepare foster and community youth to reach their greatest potential.”

The Orangewood Adventure Challenge is an annual, competitive, team-based race over a 25-mile course consisting of running, mountain biking, kayaking, and other elements involving teamwork. Team members complete the entire race while staying within 100 yards of each other throughout the event. This year’s Adventure Challenge took place at Crystal Cove State Park in Laguna Beach. 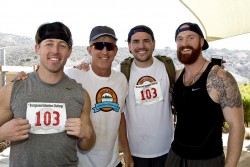 The NIC Partners team of four was led by Managing Partner, Frank Spaeth. When Frank was invited by Paul, a personal friend, to participate, how could he refuse? Frank remarked, “My brother Paul Tobin wouldn’t steer me wrong, would he? About a month [before the event], I thought I might want to consider preparing a bit for this thing, but what the heck, it’s a charity thing, how tough could it be?” At the kick-off dinner the night before the race, Frank began to realize what he had signed up for and some nerves began to rise. But after meeting some of the kids that have been helped by the Orangewood Foundation, “foster kids with grit, taking advantage of a small bit of assistance and doing something great,” he knew there was no option but to push himself through it. And he has no regrets that he did. 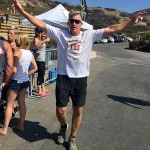 The race started out with a three-mile soft sand run, followed by three miles of kayaking, eight miles of biking, a three-mile “walk” and eight more miles of biking (downhill mostly), finishing with a run down to the beach for a final team challenge. The Challenge took nearly five hours to complete from start to finish.

Team NIC Partners finished in 3rd place and has raised $12,370 so far. Overall, the Challenge has raised to date about $123,000 for student scholarships. Frank thanks all those who made contributions, which can still be made at the Orangewood Adventure Challenge Leaderboard. NIC Partners anticipates sponsoring and participating in this worthy cause again next year.